OUR POW/MIA CHAIR OF HONOR

The Montgomery community made a good showing to honor our military veterans Nov. 11th at a procession and ceremony at the Memorial in Montgomery Veterans Park. The featured speaker was Montgomery Twp. Police Officer Christopher Jaeger, a veteran of Operation Iraqi Freedom and member of the N.J. Army National Guard with 23 years of service. Freeholder Mark Caliguire, MVMC, assisted in the unveiling of a POW / MIA Chair of Honor, organized by Rolling Thunder (N.J. Chapter). Deputy Mayor Ed Trzaska also offered remarks. Master of Ceremonies was Peter Rayner, MVMC, and an invocation was offered up by Rev. Anthony Godlefski of MUMC. The Montgomery High School Marching Band, Boy Scout Troops 46 & 850 & Cub Scout Pack 850, Girl Scout Troops, first responders from Fire Co. 1 & 2, and MEMS, and many other volunteers participated in this year’s observance. The event was organized by the Montgomery Veterans Memorial Committee, Mike Maloney, Chairman.

MONTGOMERY — More than 31 million soldiers, sailors and airmen went off to war during World War II, the Korean Conflict and the Vietnam War combined — but 83,000 of them did not come home, either because they were missing in action or became prisoners of war.

To honor those 83,000 missing soldiers, sailors and airmen, the POW/MIA Chair of Honor was dedicated at the township’s annual Veterans Day ceremony at Montgomery Veterans Park last week. It will be on display in several of the Montgomery Township public schools. .. 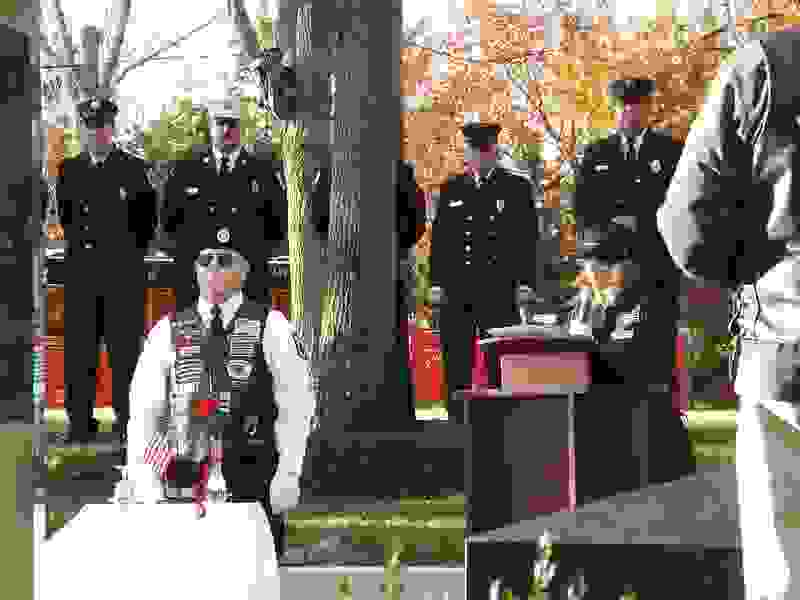 A round table set for one.

To acknowledge Veterans Day, Deputy Mayor Ed Trzaska presented a proclamation from Township Committee. The ceremony is a reminder “of our gift of freedom and of those who gave all to make sure future generations continue to know life in a free, democratic society,” he said.

“Those that are gone created a clear pathway for us to continue on (and) we must never waiver from that path of freedom and democracy,” Mr. Trzaska said. “To our veterans — past, present and future — may God bless you for your service and sacrifice.”

Guest speaker Christopher Jaeger, who enlisted in the U.S. Army and now belongs to the New Jersey Army National Guard, called on the attendees to stop and think about the men and women who are serving in the military to make the United States as great a country as it is. Mr. Jaeger is a Montgomery Township police officer.

Mr. Caliguire reminded the attendees that when there is a war, it is unlikely that every soldier, sailor or airman will come home. The families are left with a hole in their hearts, he said.

There were 73,515 military personnel who did not come home after the end of World War II, and there were 7,841 more who did not return after the Korean War, he said. There are still 1,618 military members who have not been accounted for at the end of the Vietnam War.

With that in mind, Mr. Caliguire said, the mission of Rolling Thunder is to ensure that Americans do not forget the sacrifices of those service members who are missing and that they will be accounted for.

Assemblyman Jack Ciattarelli said there is a tendency to forget about the veterans and that sometimes, people need to be reminded of their sacrifices. That’s the purpose of Veterans Day —

to honor all military veterans, he said.

“Thank you, veterans, for your model citizenship."